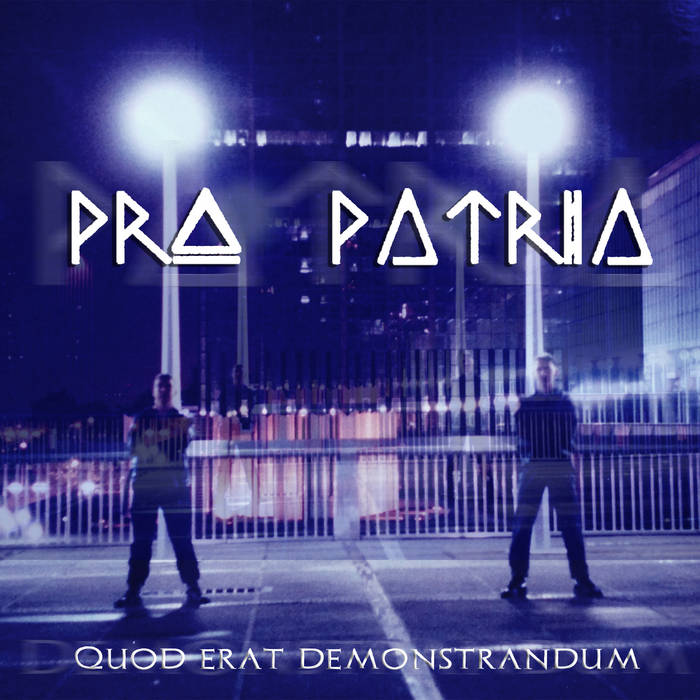 Quod Erat Demonstrandum was the result of the cooperation between Pro Patria and the German Celtic Circle record label. It became a sort of compilation of ten years of Pro Patria, featuring some of the old songs such as Manslayer and Jump to Nowhere (both already composed in 1988) all the way to new songs especially composed for this album (Mind, Error and Quid Taces). Therefore the evolution of the band is quite audible and shows how they eventually created their own, specific sound. The production of the cd lasted a full seven months and due credit must be given to Marc Schellekens, the professional studio engineer who skillfully sculpted the broad and complex Pro Patria sound.

Unfortunately, Celtic Circle declared bankruptcy at the moment that the cds were being printed and therefore they never made it out of the factory. Pro Patria still tried to offer the finished cd to other labels but failed because electro/EBM was as good as dead in the nineties and because they refused to accept compromises, e.g. by making their music sound more like popular techno. Therefore "Quod Erat Demonstrandum" was only produced on a very small scale and only about eighty home-printed cdrs made their way to the public during the band's last couple of gigs.

Belgian origin Pro Patria was founded in 1988 by Peter V. (aka PVC). Out of the collaboration with CCP arose "Quod Erat Demonstrandum" in 1997. Unfortunately, CCP faced bankruptcy and personal trouble meant the end.
In 2017 Peter was invited to play at the Familientreffen festival, which motivated him to produce "Back to Basics". In 2019 Pro Patria released its 3rd full album "Executioner". ... more

Bandcamp Daily  your guide to the world of Bandcamp

New sounds from Mavi, Ivy Sole & Moderator, plus AJ, the One joins the show, for her latest release